The castle of Mitterfels as a centre of administration 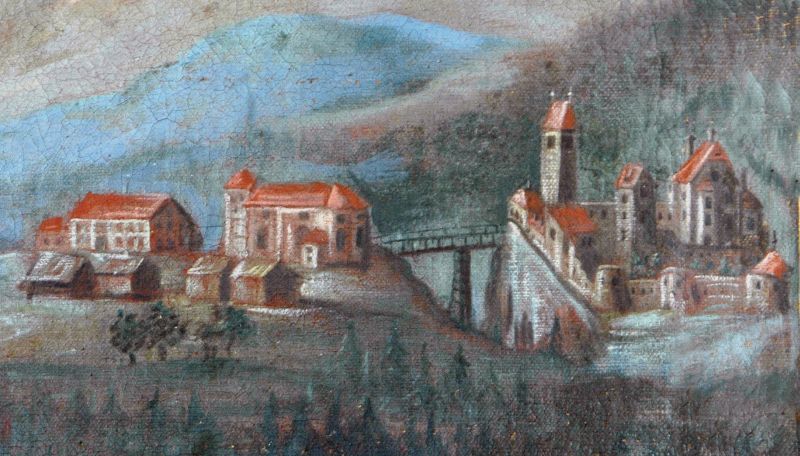 Mitterfels - in the year 1750 only a small village with an important castle  - Berchtoldus de Mitterfels, the castellan of Mitterfels, appears as a witness in a historical document of donation in 1194

In 1995 Mitterfels could celebrate an important festival with lots of performances: Mitterfels turned (at least) 800 years. The oldest known historical document that mentions Mitterfels by name is a document of donation dating back to the year 1194. Berchtoldus de Mitterfels, the castellan of the castle in Mitterfels, is mentioned there as a witness.

The castle of Mitterfels belonged to the count of Bogen whose residence was in a distance of about 10 kilometers south of Mitterfels, next to the river Danube (Donau). He owned all the territory north of the river Danube – a land with huge forests and a lot of game, but inhabited by only few people. He planned to clear the woods and cultivate the land and for that reason he built castles to protect and to administer his possession. The castle of Mitterfels was the middle one of three castles and is situated on a long ridge of a hill, or rock. (The German word “mitter” means “middle”, “Fels” means “rock”.) A small village for the employees of the castle was built on the narrow ridge north of the castle. Some manual workers, traders and farmers followed. For about 750 years Mitterfels remained a small village with two lines of buildings along the street to the castle. 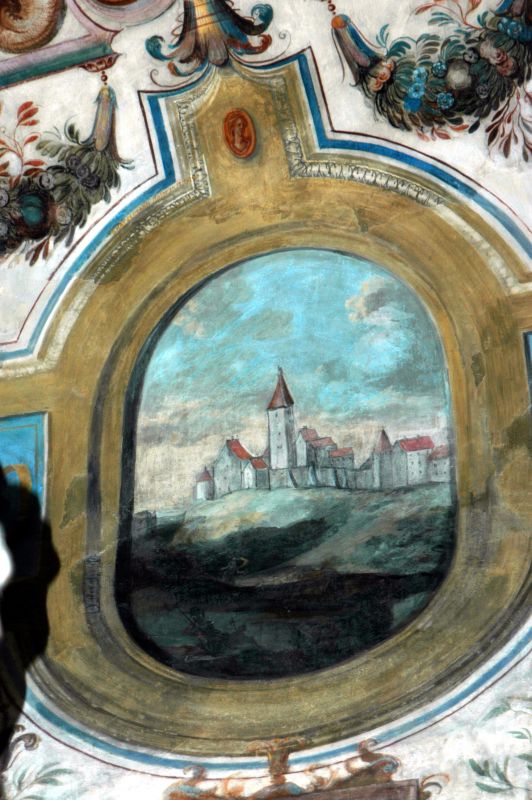 In 1204 the count’s of Bogen young widow married the duke of Bavaria (Baiern, Bayern), Ludwig I. of the Bavarian dukes’ line “The Wittelsbacher”. The Wittelsbacher took possession of the castle Mitter­fels in 1242. In the following years and centuries Mitterfels became a centre of administration with several important offices for the whole district and even the region.

In addition to the castellan Mitterfels was given a court with a prison. In the course of the centuries it was the seat of the Duke’s, the Prince’s and the King’s of Bavaria court, a “High court”. That meant, that the judge was allowed to punish a criminal for serious crimes through execution. The last beheading (by Schafott/scaffold) in Bavaria is mentioned in the year 1847 and was executed in Mitterfels. It happened to be a teacher punished not for his wrongdoings at school, but for paying a servant to kill his wife. An even more peculiar execution took place 100 years before. A man was beheaded for attempting suicide three times.

The castle of Mitterfels on a painting in the residence of the capital town of Bavaria, Munich, dating back to 1590. It shows a huge castle with a high tower. 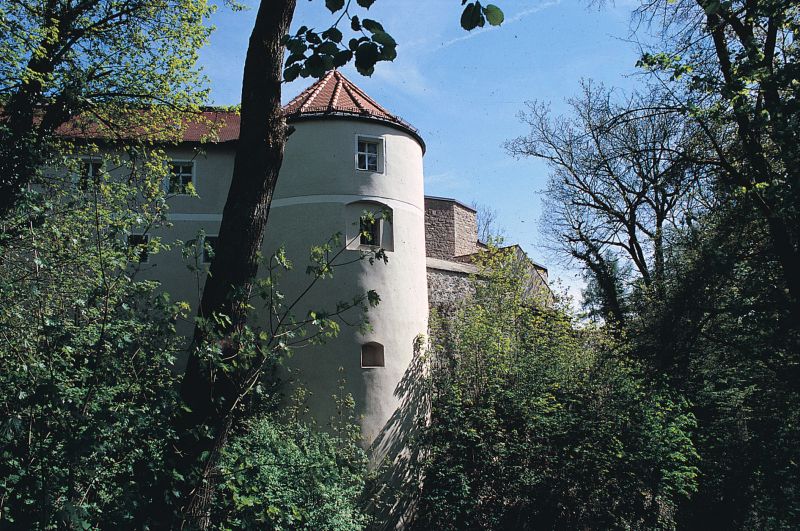 Today in the original prisoners’ cells there is a very interesting museum with a lot of rural implements and other tools and equipments. Visitors to the castle sometimes mention that it doesn’t look like a castle. There are high walls, a bridge over a castle moat – but there is no tower. There used to be one, but it collapsed in 1882 – unfortunately.

Nowadays there is a very interesting museum in the original prisoners' cells ...

Between the years 1803 and 1932 Mitterfels was the seat of the district’s bursary, called “Rentamt”. It was located in a big building 300 meters north of the castle. Consequently Mitterfels was a village with a lot of civil servants. The relationship with the rural inhabitants wasn’t always at good terms. The officials were said to be snobbish. On the other hand they organized a lot of cultural events in this small village. Over the last century all these offices have been moved to bigger towns, where the adminis­tration was comprehended. 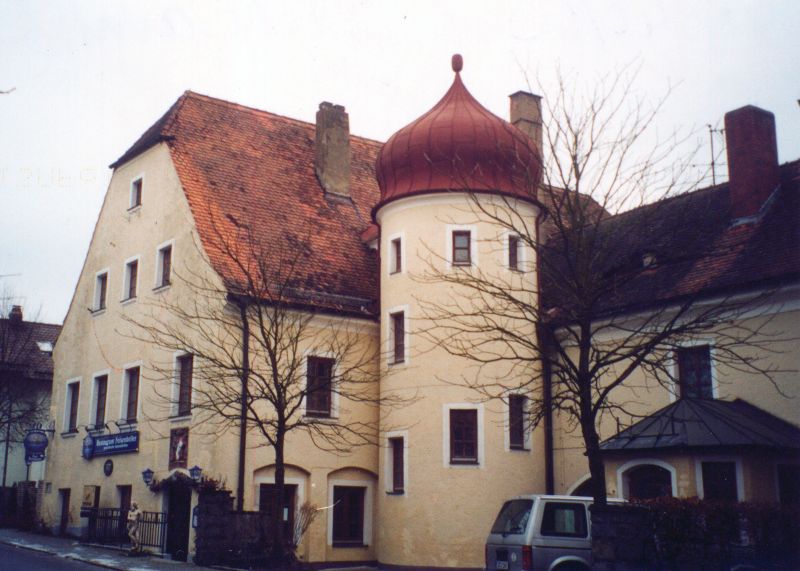 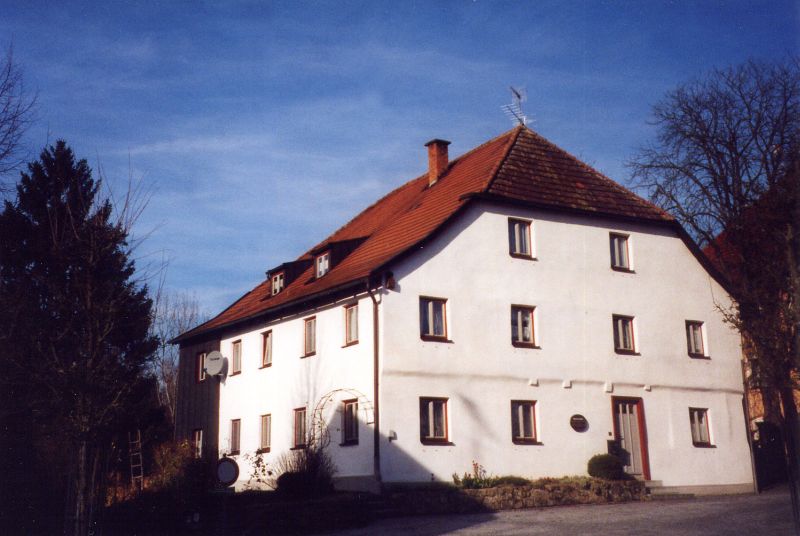 The building on the left was the district's bursary, the other one is the beautifully restored "Kastensölde".

Another very interesting building of Mitterfels is the “Kastensölde”, a house built of wooden bars, the walls plastered, now beautifully restored. In former times it belonged to the court. People had to bring the tenth part of their income or their harvest – food or animals – to this “Kastensölde” as taxes.

It is hardly imaginable that only forty years ago the “Burgstraße”, the street to the castle, was the main street of Mitterfels, a real shopping centre with about 20 shops, where you could buy nearly everything you needed. There you could find the metal worker’s, the carpenter’s, the printer’s, the chemist’s shop, two baker’s, three butcher’s and about ten grocer’s shops, 5 taverns….

The historical part of Mitterfels is situated on a long ridge of a hill.

A lot of shops have closed, even the old catholic church isn’t the parish church anymore, in the former schoolhouses pupils aren’t taught anymore. 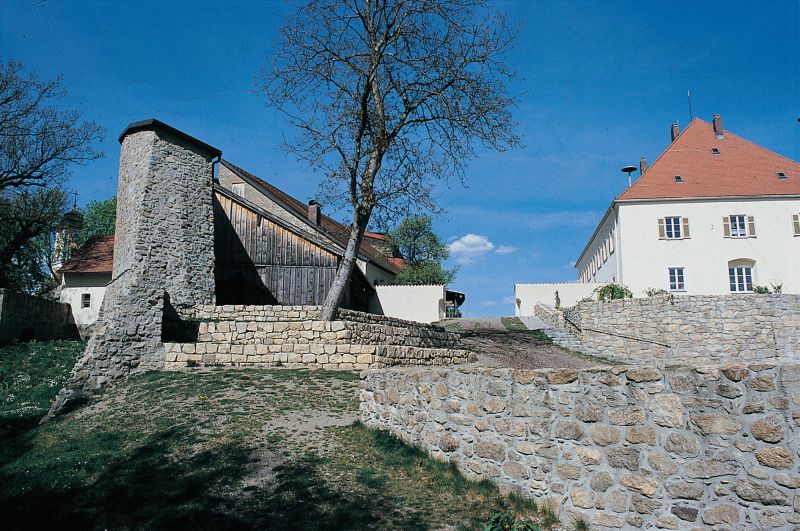 The castle of Mitterfels today

Today you will get a lot of things for daily life in Mitterfels, e.g. in two big supermarkets and in shops in the new parts of the village. Times change …. but for all that – the “Burgstraße” is still the “heart” of Mitterfels. Some shops are still there, you can visit the wonderful church of St. George, the music school was founded …. In the year 2000 the Bavarian government, the former owner of the castle, restored the walls and other parts of the building for millions of German Mark. After its completion the community of Mitterfels was able to buy the property for about 300.000 German Mark. And therefore we “Mitterfelser” are owner of a castle. We use it for exhibitions within the castle yards, for performances of open air musical theatres, for open air concerts …. The building, that was used to be the district court, is now the town hall and the administration centre of the four communities Ascha, Falkenfels, Haselbach and Mitterfels. 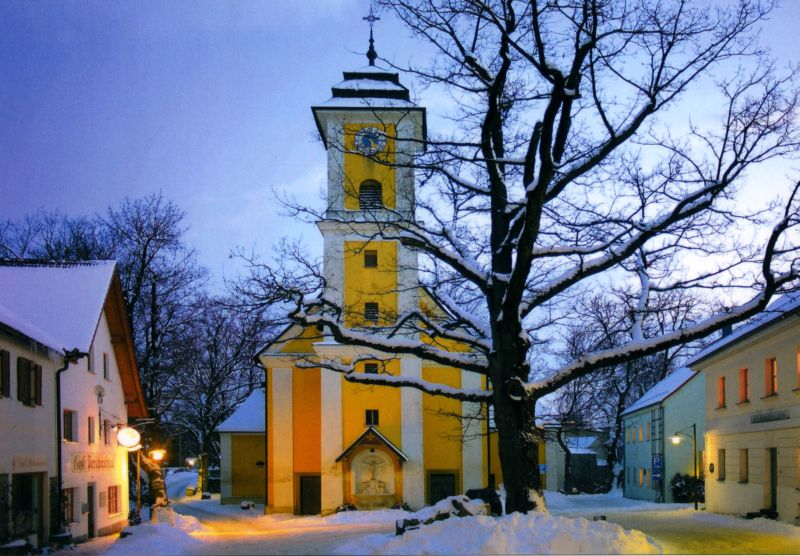 Till the year 1809 Mitterfels didn’t have a parish church. There was only a small chapel outside the castle moat. The inhabitants of Mitterfels had to go a long way to their parish church in the out-of-the-way-village Kreuzkirchen that was situated between Mitterfels and the river Danube. There was the church yard, where their ancestors were buried, and there was the school for their children. In 1734 the church St. Georg was built in front of the bridge to the castle.

In the year 1809 church and school in Kreuzkirchen were closed by government’s decision (called “Säkularisation”) and moved to Mitterfels. St. George became parish church.

The former parish church St. Georg. The castle is situated behind the church.

But there was no building for the schoolboys and schoolgirls in Mitterfels. A farmer placed a small house at disposal for school. It is called “Hiensölde” or “Alte (old) Sölde”. A bad place for children: It was wet, cold and dark inside. The room, where one teacher had to teach all children, was small and narrow. (Nowadays we know, that this house - built of wooden bars -  is the oldest rural house in the whole region. The result of a dendrochronological analysis was, that some bars date back to the year 1434.)

Also the old church of St. George became too small, the new church in “Lindenstraße” was inaugurated in 1972.

Thanks a lot to Mrs. Conny Burger-Tosch who went over the English diction.